Combat Archery (Archery Tag ®) is an exciting action packed game, described by its founder as a cross between dodgeball and archery! Players are armed with bows and patented foam tipped arrows which are harmless.

This sport is currently enjoyed by dozens of countries spanning six continents and can be enjoyed by players young or old!
Combat Archery involves two teams, consisting of 5 players each playing opposite one another, separated by a “safezone.” Each team also has what we call a “5-Spot Knockout Target.”
There are two objectives: 1) to hit the opponents, and 2) to knock out the five discs of the opposing team’s target. You eliminate a player by hitting him or her with an arrow, or by catching his or her arrow. 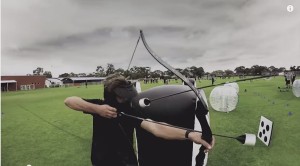 The 5-Spot Targets work to save a “life” of one of the players. A “hit” player can be called back into the game when a target spot is knocked out or when a teammate catches an arrow.
Using the inflatable bunkers as cover, players must work together as a team, to defeat their opposition. Fantastic fun for all ages!

Get in touch for details! We can easily set up at a location of your choice or you can join us at our ground

2 Types of game with differing rules

This style of game play makes a great spectator sport because it is fast paced with many lead changes, when a player is hit they remain in the game and continue to play. As one can imagine, it is quite frustrating to be tagged out within 30 seconds for a new player just learning to shoot and play Combat Archery.

The object of this style is to score as many points as possible in the allotted amount of time for that one round (typically 5-10 minutes depending on scheduling and number of players).

• Teams are awarded one point for each opponent tagged with an arrow. In any of the following manners:

o Players body (including the head)

o Anything touching that player counts as a hit

This style is more like dodgeball, involves more risk in the game. It offers a different level of excitement due to the fact that if you are hit you are out until a team member catches an opponents arrow to bring you back in play or knocks out one of the opposing team’s 5-spot targets.

The object of this style of play is to have the most players and target spots remaining at the end of the timed round (typically 5-10 minutes depending on scheduling and number of players).

• A player shall be deemed “out” for being tagged with an arrow. In any of the following manners:

o Players body (including the head)

o Anything touching that player counts as a hit

• There are two ways in which to recall a tagged out player:

o Catching an opponent’s arrow (as indicated above)

Combat Archery is a physical activity therefore it’s important that you’re cool and comfortable, so wear old clothes that you don’t mind getting a bit hot and sweaty in! Trainers or shoes with a good grip are also recommended.

£25 per person for a 2hour session of combat archery (broken up into a number of separate games) – Ideally we need a minimum of 10 people (5 on each team) but please contact us with your requirments and we will accommodate.

Contact use to arrange you booking and why not add clay pigeon shooting to your package for better rates!